What we think, we become.
-Buddha 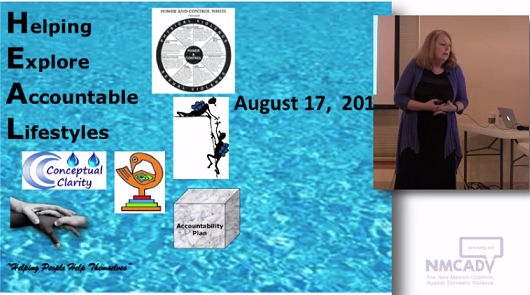 Jeffrie Cape discussing the H.E.A.L. curriculum during a training programme organised by the New Mexico Coalition Against Domestic Violence (NMCADV).

Jeffrie Cape is a licensed master social worker with over 25 years of experience. She earned her degree at Case Western Reserve. Her career path has been varied and along the way she developed assessment and story telling skills that have translated effectively into diverse settings. She is a trainer on multiple subjects and has spoken in Michigan and other states. She has worked in clinical and community settings and has experience training staff, creating, developing and implementing programs.

Her career began working with children in foster care, where she developed her first area of expertise, survivors of child sexual assault. She quickly learned that to help children she had to work with their parents, which lead her to develop skills in substance abuse assessment, intervention and treatment.

Leaving the foster care field she became an EAP (employee assistance professional) with particular expertise in critical incident stress debriefings and trauma work. Here she refined and expanded her assessment skills. During that time she was an active member of the education and training committee for the professional organization, EAPA.

In 1994, returning to clinical practice as a manager at Family Service Inc, Jeffrie became involved in the domestic violence field and felt there was a need to have programs for the batterers. Advocating in her agency and networking in the community she became involved in the then embryonic BISCMI (Batterer Intervention Services Coalition of Michigan) and other local task forces. She helped create local standards for batterer intervention programs eventually becoming a member of the governor’s task force to develop state standards. She was active in the planning and implementation of the first BISC conference, which lead to the formation of BISCMI in 1995. She has served on the board ever since.

After leaving Family service Inc. Jeffrie worked to create a jail based program for batterers with substance abuse problems and in the court system doing presentence investigations.

Jeffrie joined ADA (Alternative to Domestic Aggression) in Washtenaw County, part time, in 2001 where she continues to facilitate groups, train and develop and refine curriculum. She also created programming for the MDOC and trained their staff on how to implement the program. In 2003 she became the director of Charron Services and started HEAL (Helping Explore Accountable Lifestyles) which meets through community corrections Step Forward program in Oakland County. In 2005 she expanded services to include WEAVE (Women Exploring Accountably Violent Encounters) a program for women arrested for violence. In 2006 she moved her private practice to Charron Services where she works with a varied client population addressing issues of substance abuse, couples counseling, children, mental health issues, life adjustment, trauma and violence.

She is an active member of NASW-Michigan where she was the chair of the education and training committee.In 2011, Gov. Snyder appointed her to the Michigan Domestic and Sexual Violence Prevention and Treatment Board. She is also a founding member of AQUILA